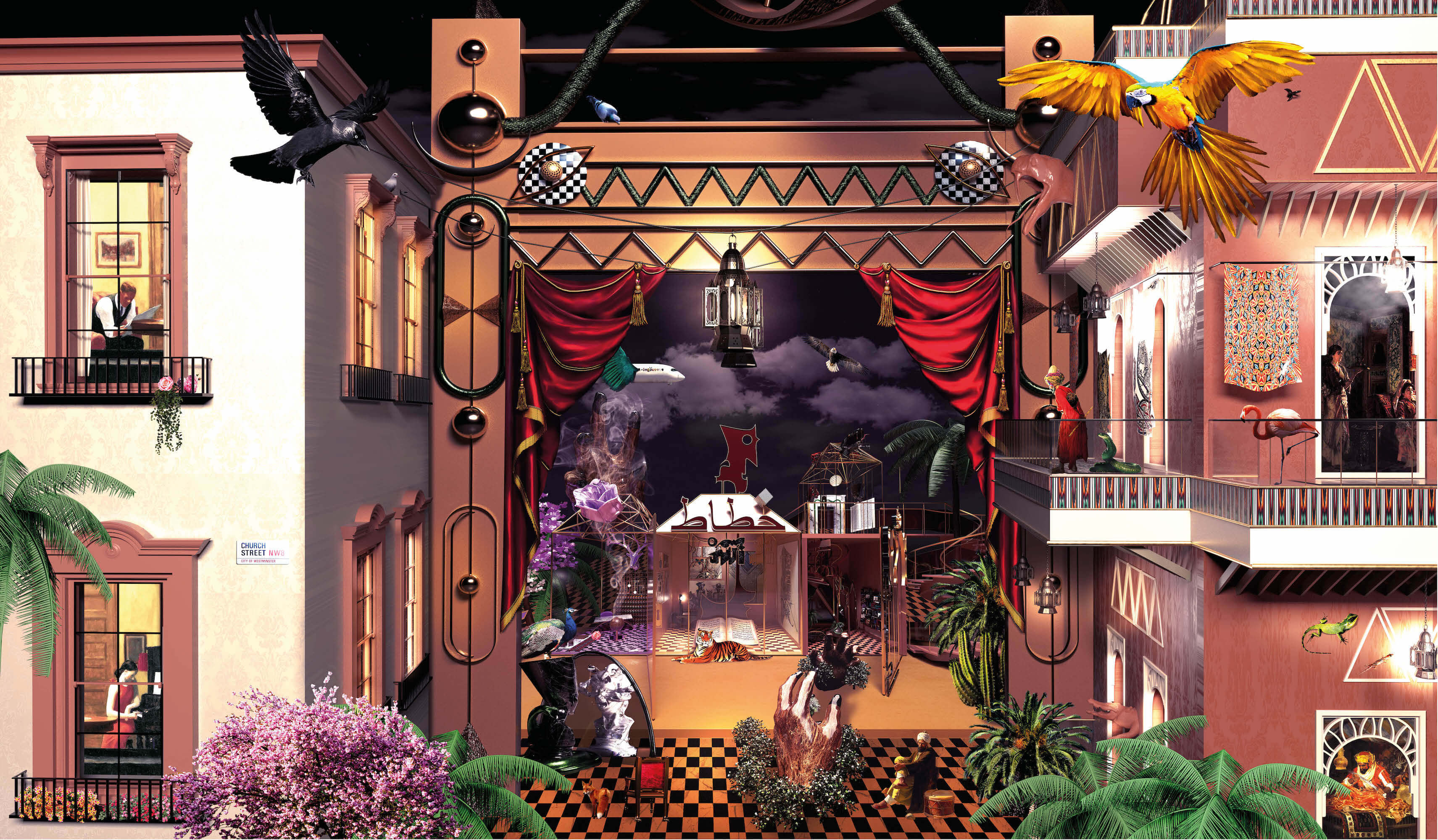 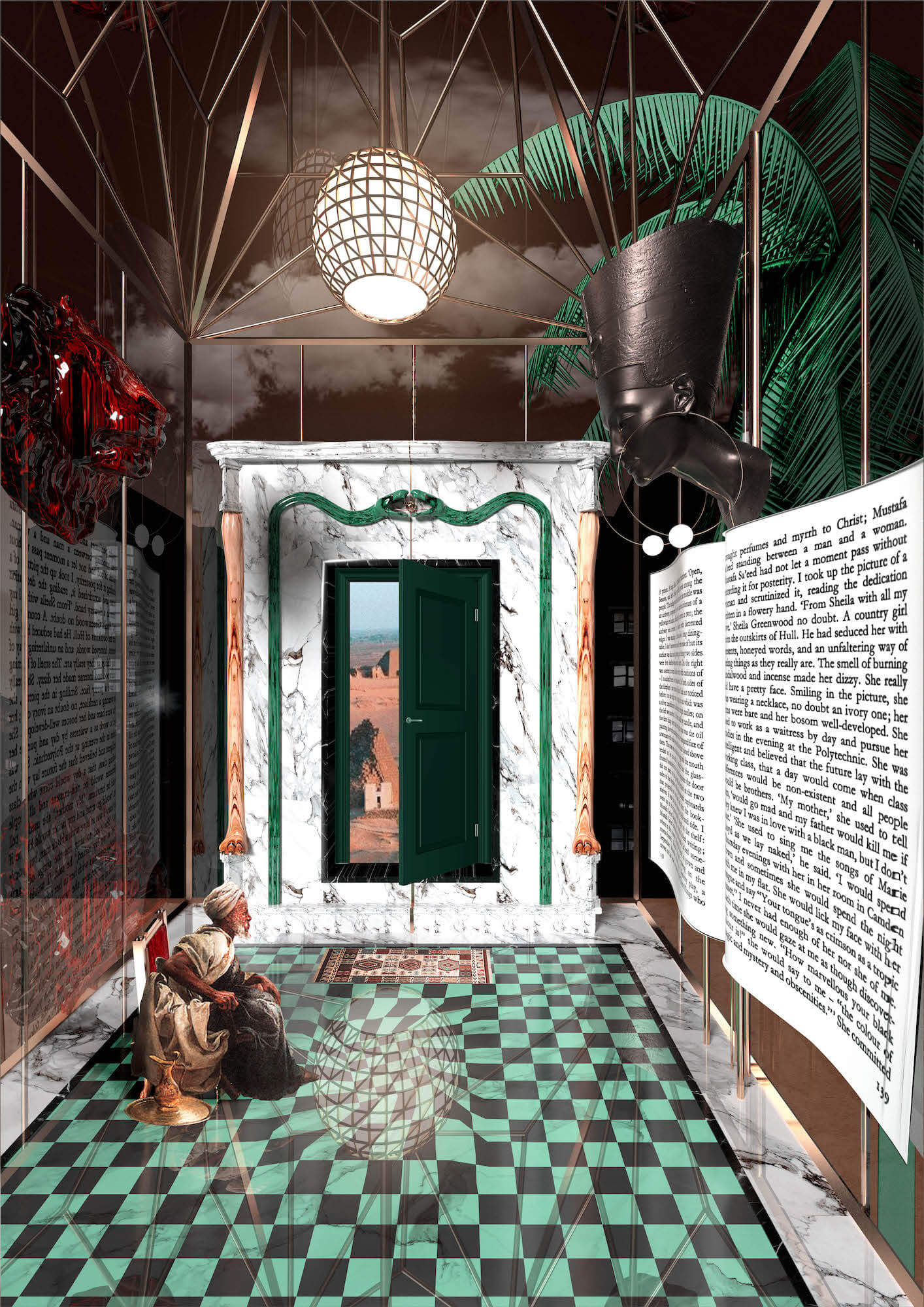 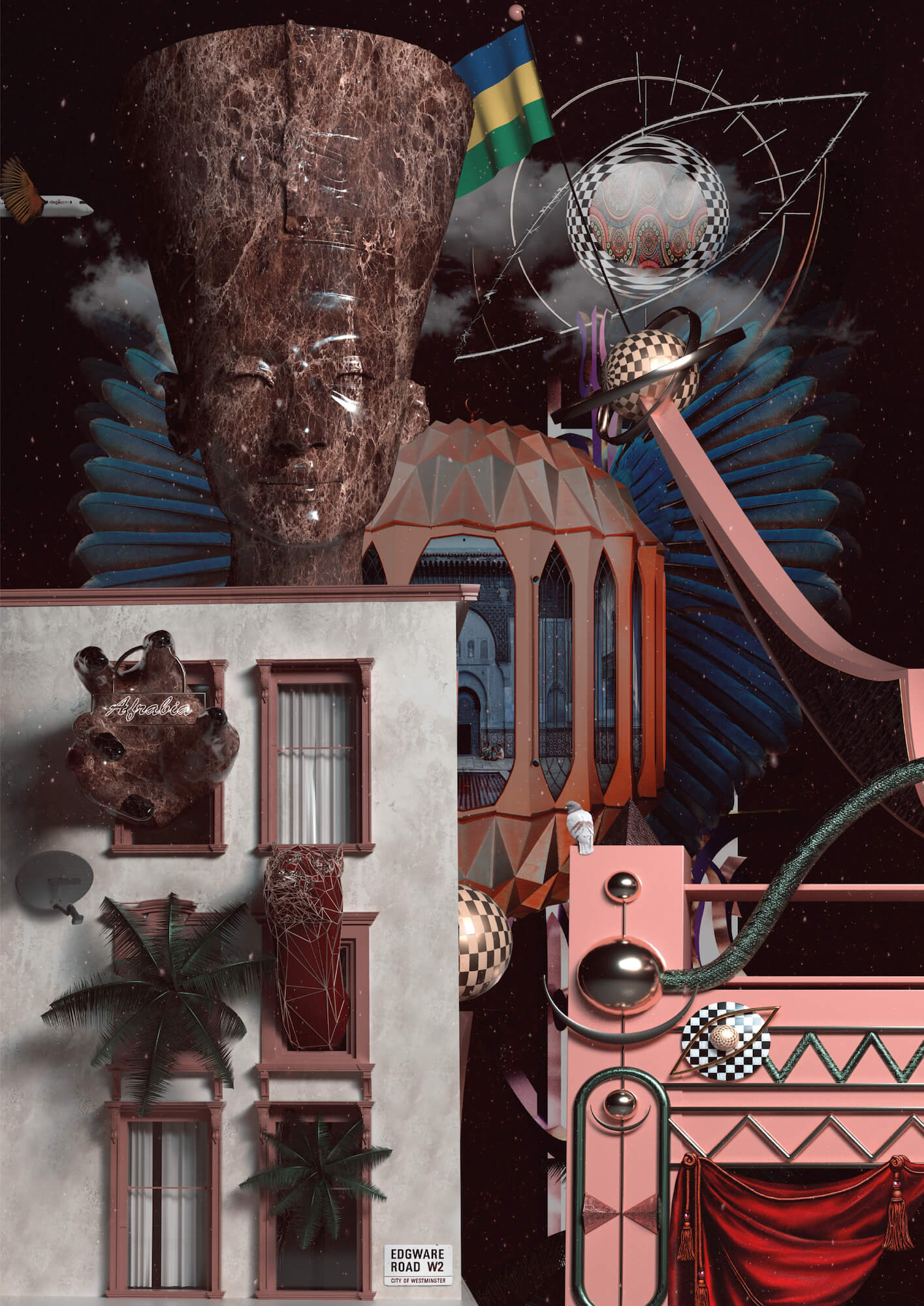 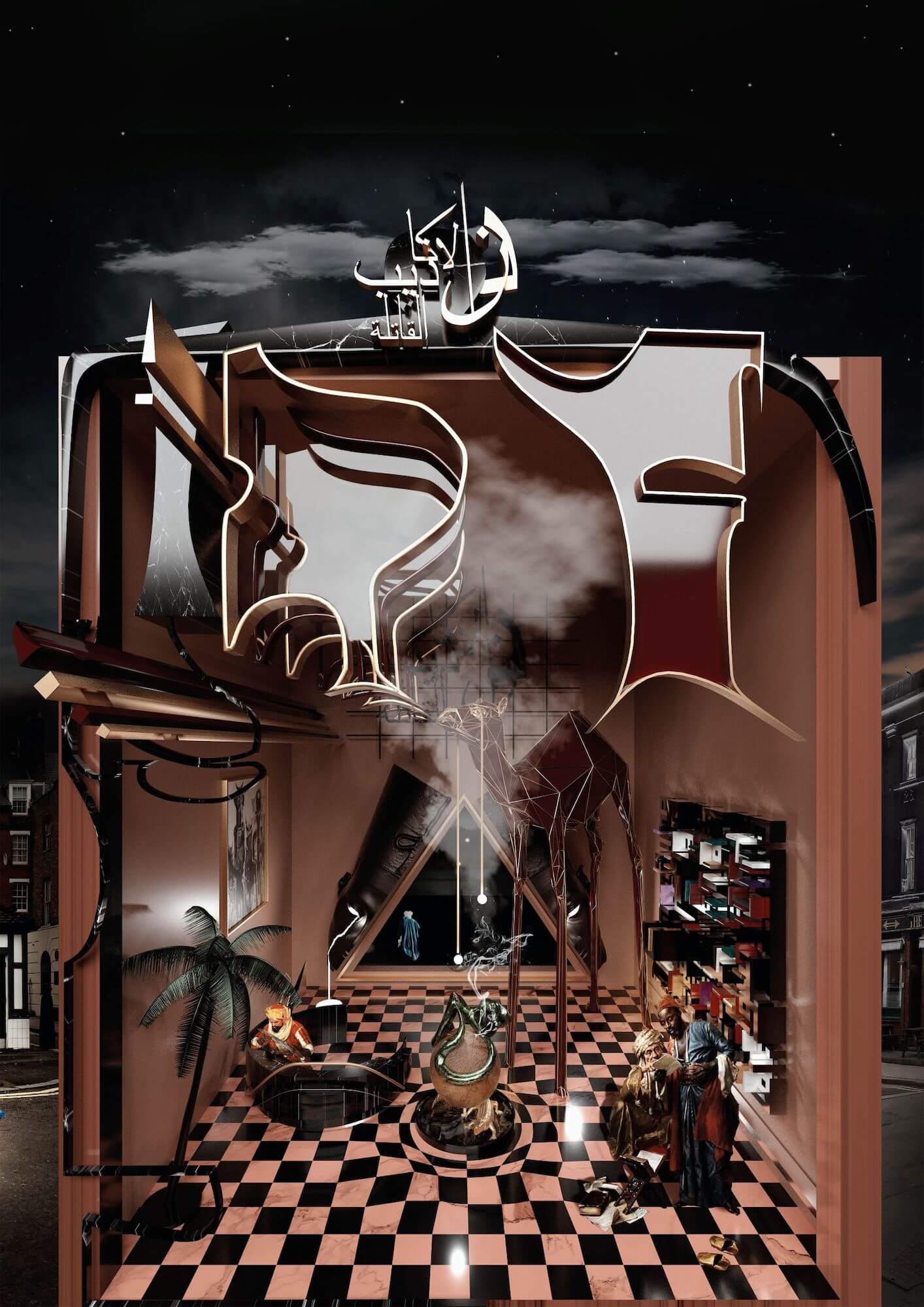 “Magic realism forces you to engage with everyday life”

Artist and designer, Rayan Elnayal, studied architecture. Anglo-Sudanese she born and bred in London. With her series of artworks “A magic realist Afrabia”, she used magic realism to tell the story of life in the diaspora. She mixed elements from United Kingdom and Sudan, to create a “third world”.

What does « magic realist » mean?

Magic Realism is the amalgamation of the real and magical world, where magical elements are utilised to express everyday real experiences that we would otherwise find difficult to explain in literal terms.

You imagine a world that mixes British and Sudanese cultural references. You call this world « Afrabia ». How do you describe this world, this universe, in relation to the one we live in? What is this third space you are talking about?

The third space is constantly living between London and Khartoum, and feeling like the amalgamation of the two identities prevents you from calling either one or the other home, it’s being from neither here or there. A term that is attributed to the scholar Homi K Bhabha, who wrote the ‘Location of Culture’. This is what then prompted me to do some research on magic realism, which is in art and literature is often used to describe the indescribable, for me it made sense to illustrate that ‘third space’ through magic realist techniques. I ended up looking at cultural hybridity in London, places like Chinatown and Edgware road where you see Western/Eastern aesthetics hybridised. You can see that in ‘East meets West’ and ‘Gate to Afrabia’.

For this series, you were inspired by a very important novel, a classic, « Season of migration to the North » by Tayeb Salih. In particular, you are directing the character Mustapha. Why did you choose to work from this novel?

This novel was perfect for the project because it was about a Sudanese individual that migrated to London, and struggled with his identity and the orientalist view that was sprung upon him- the idea that he was the exotic Afro-Arab man. The writer also uses very unconventional techniques to deliver the narrative, for example the narrative does not follow the characters in a linear time format, which for some reason really worked, and I think it’s because it feels parallel to what occupying that third space is like. It feels like a conceptual space with no space time continuum. So of course, the novel had to follow the characters memories, going back and fourth, bouncing between them.

To what extent does your work involve the creation of science fiction in the sense that it allows us to reflect on the present and the real while drawing thoughts for the future? To what extent is the universe of « Afrabia » a dream, a utopia?

Afrabia, or magic realism, I believe can aid in the creation of productive science fiction narratives that are more reflective of our social/ cultural structure. Magic realism forces you to engage with everyday life and therefore important social and cultural cues. It helped me move away from ‘Afro-futurist’ places like Wakanda. To me Wakanda is a very orientalist view of what African sci-fi could be- it’s western sci-fi painted in African ‘aesthetics’. I don’t know if my work can be categorised as afro-futurist , but it defiantly draws inspiration from afro-futurist ideas. I struggle with marrying magic realism and futurism sometimes, I don’t find that they agree but it can be done. I attempted this in the ‘Flying Mosque’ but I’m not sure it has worked.

To talk about one of your works and « Afrabia » you write: « a magic realist landscape populated by monuments dedicated to Sudan’s lost and forgotten history. An ode to the lost city of Meroe and to the endless possibilities of an independent future, free of war, corruption and Western ideals and influence »  . Can you tell us about the imaginary of Sudan from which you draw inspiration?   The one that is and the one that is no longer? You focus more on Khartoum, don’t you?

I draw inspiration from the Sudan that I love and that includes where my family lives- Khartoum. That includes my idea what of what was, is and will be Sudan. One thing I love about traditional Sudanese homes is the ‘hosh’ or courtyard, you can see that re-iterated in my piece ‘Hoshna’ For me it is also about being able to re-tell your own history which I think is very important for places like Sudan, that has suffered from its rich history being continuously erased. I can’t imagine Sudan’s future without it’s history first being re-told.

What can architecture do to describe this world « Afrabia » ?

Architecture helped visualise and speculate on methods of exploring Arab-futurist and Afro-futurist ideas.

For « Imagining Afrabia », the work on the cover was the one depicting Kandaka the Nubian queen of Meroe. Can you tell us about it? What does she represent in the imagination today?

To accompany one of your works you talk about a journey in Afrabia that ends but which remains, in the memory, an image of Khartoum. Does your exploration of Afrabia end for other works?

The exploration continues but I enjoy taking viewers through somewhat of a journey through Afrabia, and that particular journey (the pieces from the ‘Imagining Afrabia’ exhibition @Richmix) ended with the vivid moment of departure that a Sudanese within the diaspora would have.

In your works, you also make the link between calligraphy and architecture, how would you define this link?

This is something that I explored during my fourth year at university and I would like to explore it further. I found it interesting how in Arabic calligraphy, fluid and abstract forms can still be orchestrated through proportional structures. I wanted to practice that through architectural design.

As an artist drawing magic realist worlds, how do you live this global health crisis with a view, I imagine, to Sudan and the United Kingdom? How do you dream of tomorrow’s world?

A lot of the things that people are experiencing now during lockdown are experiences that the Sudanese people experienced last year during the revolution- airports closing, universities closing, long queues for bread etc. I hope that both the revolution and the pandemic only catalyses that socio-political change that the Sudanese people demanded during the revolution. I think the Sudanese people knew all too well that things needed to change but I think the pandemic has reminded people elsewhere that change is still necessary. As an artist, I learnt from the revolution that art played an extremely important role in catalysing that change, which I found to be very inspiring. I hope that tomorrow’s Sudan can be a place where talent and innovation isn’t supressed by people in power.